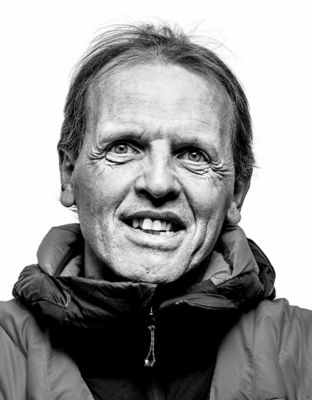 Simone’s childhood passion for exploration has delivered him to the ice-encrusted summits of the highest mountains on Earth and his career achievements will light up the chronicles of climbing history for years to come. A tenacious master of the winter ascent and a technically gifted specialist in fast and light alpine climbing, he is one of the most respected climbers in the world and a source of inspiration to an entire generation of climbers.

To realize the Everest-Lhotse traverse without oxygen or one more winter 8000m peak.

How do I focus

To believe in my dream and not in what others think.

Never stop dreaming and attempting what is considered "impossible."

Words to live by

I don’t leave home without my...

Simone Moro’s achievements within high-altitude mountaineering are matched only by his feats of bravery. A veteran of 15 winter expeditions, he is the only alpinist to have completed four 8,000m ascents in winter, on Shisha Pangma (8027m) in 2005, Makalu (8485m) in 2009, Gasherbrum II (8035m) in 2011 and Nanga Parbat (8126m) in 2016. And, in 2001, he abandoned his own attempt of the Everest-Lhotse Traverse, to save English climber, Tom Moores who was stuck on the west face of Lhotse. He endured horrific conditions in darkness, on his own with an extremely high risk of avalanche and without supplementary oxygen. Furthermore, as the first European helicopter pilot qualified to fly in Nepal, he has also completed numerous rescue operations from the air – including taking part in the highest long-line rescue at 7,800m on Everest in 2013.

However, his climbing career actually started on rock in the Bergamasque Alps in his native Italy at the tender age of 13. He continues to rock climb, with up to 8b+ on rock and M11 mixed, and an equivalent standard on ice – but it is his success as an expedition climber which has sculpted his legendary reputation.

When he’s not climbing mountains or flying his helicopter, he’s parachuting or wing-suit skydiving. He’s an author of five books about lessons learned and experiences enjoyed in the mountains.

His winter ascents of Makalu and Gasherbrum II earned him two nominations for the Piolet D’Or Asia in 2009 and 2011.

He has twice received the Premio Paolo Consiglio (the mountaineering award of the Italian Alpine Club) in 2005 and 2009, as well as the Premio Dalla Longa in 2008 and 2009.

His rescue of a British climber on the Everest-Lhotse traverse of 2001 earned him the Pierre de Coubertin International Fair Play Trophy, the Italian Gold Medal for Civic Value and the David A. Sowles Memorial Award from the American Alpine Club.

A winter first-ascent in the coldest region on earth

A 5.5 km traverse above the death zone