A 5.5 KM TRAVERSE ABOVE THE

IN MAY 2017 SIMONE MORO AND TAMARA LUNGER ATTEMPTED THE HIGHEST TRAVERSE ON EARTH. THIS IS THEIR STORY.

The highest traverse on earth plots a treacherous route over four of the five peaks of Kangchenjunga, the third highest mountain in the world. It’s a route through the death zone with a very small margin of error. Alpinists Simone and Tamara attempted to climb from Yalung Kang (8,505m) to the South Summit (8,476m) via Kangchenjunga (8,586m) and the Central Summit (8,482m) without supplemental oxygen or local climbing Sherpas.

22nd of May, Simone and Tamara reached 7,000m, but Simone was unwell so they decided to return to basecamp. They rested for a couple days with the intention of attempting the traverse again later in the week.

24th of May, Simone and Tamara have left BC towards C3.

25th of May, Simone and Tamara head towards C4.

25th of May, Simone and Tamara rose early to head towards camp four. Their tracker stopped working at 6,953m but they pushed on to 7,200m. Simone felt weak, still not fully recovered from feeling unwell a few days later. He could no longer stand so they made the wise decision to return back to basecamp. They didn't attempt the traverse again.

The team is now safely at basecamp and have decided not to attempt the traverse again this trip.

Simone - "After achieving seven ascents, and Tamara achieving eight, including attempts and acclimatisation ascents, today was the perfect day to reach the summit. However, this meant being at camp 4 already yesterday with a much longer window of good weather – this window though never occurred. In spite of this we never gave up on the idea of reaching the summit and making the traverse. We will treasure what we learned this time on the mountain, a bit like what happened on Nanga. It is an ambitious objective, but nothing is impossible."

Tamara - "Many things happened during this expedition, even bad things. But as a team we've come out even stronger, we have always supported each other during the difficult moments. The mountain is beautiful, it is like a paradise, especially from 4 upwards – the route to paradise is long though! We have definitely learned a lot from being here and I might, one day in the future, feel like coming back again."

The mountains are his playground and his success as an expedition climber has sculpted his legendary reputation.

When she was a 14-year old girl, she announced that one day she would climb an 8,000m mountain. She remained true to her word. 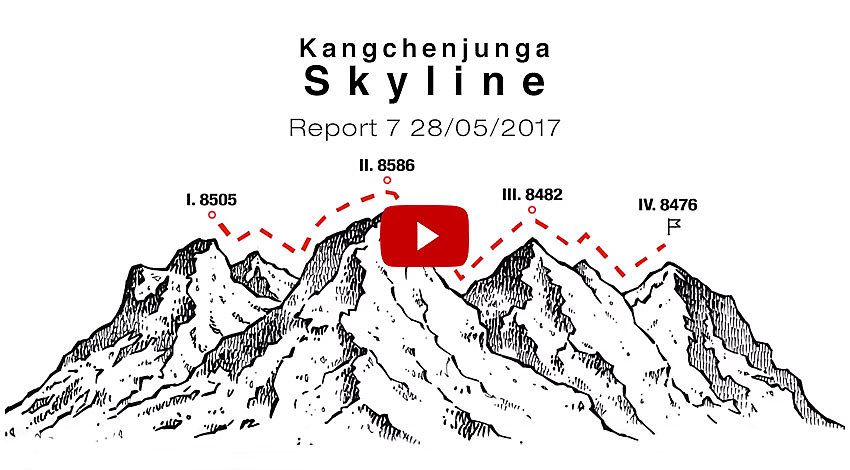 The DEATH ZONE is the name used by mountain climbers for high altitude where there is not enough oxygen for humans to breathe. This is usually above 8,000 metres (26,247 feet).

THE TEAM WILL CLIMB ALPINE STYLE which means they will need to carry all their gear from basecamp for approximately 7 days, without any deposit and external help along the way.

ATTEMPT WILL BE WITHOUT ANY SUPPLEMENTARY OXYGEN.All previous partial traverses used oxygen.